This post is based on the paper Everest's thinning glaciers: implications for tourism and mountaineering From 1984 to 2015, approximately 71,000 Olympic size swimming pools worth of water were released from the melting Khumbu Glacier in Nepal, which is home to Everest Basecamp. Find out how Himalayan glaciers are changing and the implications for downstream communities in this Image of the Week.

Debris-covered glaciers thin, rather than retreat

Erosion in the rugged mountain topography leads to high quantities of rocky debris accumulating on the glacier surface, which changes the glacial response to climatic warming. The debris-layer (which can be several metres thick at the lower terminus) insulates the ice beneath, leading to highest melt rates up-glacier of the terminus. Therefore these debris-covered glacier thin, rather than retreat up-valley.

This thinning is actually a complex process of sub-debris melt, and mass loss associated with supraglacial ponds and ice cliffs, which form pits on the glacier surface and are ‘hot-spots’ of mass loss. Since the highest rates of surface lowering are up-glacier from the terminus, the surface slope of the glacier reduces and meltwater increasingly ponds on the surface, which can ultimately form a large glacial lake.

The image of this week (Fig 1) shows surface elevation change on Khumbu Glacier, which flows down from Everest and is home to Everest Base Camp in Nepal. Parts of the glacier surface have thinned by up to 80 m 1984−2015 and over 197,600,000 m³ of ice melted over study period, which is approximately 71,000 Olympic size swimming pools worth of water! The thinning is clearly visible in the vertical offset between the contemporary glacier surface and the Little Ice Age moraines (a) and is highest in the mid-section of the glacier (b). Mountaineers ascending Mount Everest climb the Khumbu icefall (Fig 2) and camp on the glacier surface. Additionally, popular trekking routes also run alongside and across the glacier, which are used by thousands of tourists every year. The accessibility of both these mountaineering and trekking routes is changing in response to glacier mass loss.

Accumulation of snowfall in the highest reaches of the glacier would typically compress to form new ice and replenish mass loss on the lower glacier as the glacier flows downstream. However, trends of reduced precipitation (Salerno et al., 2015) and decreasing glacier surface slopes promote a reduction in glacier velocity. Figure 3 shows glaciers stagnating in their lower reaches, where water is also visibly ponding on the glacier surface. For Khumbu and Ngozumpa glaciers, this contributes to the development of large glacial lakes. If these lakes continue to grow, once fully established they can rapidly increase glacier mass loss as a calving front develops (e.g. at Imja Lake). This post appeared on the EGU Cryosphere blog Image of the Week here, edited by Sophie Berger 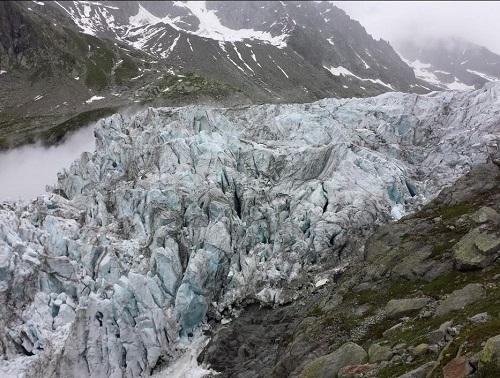 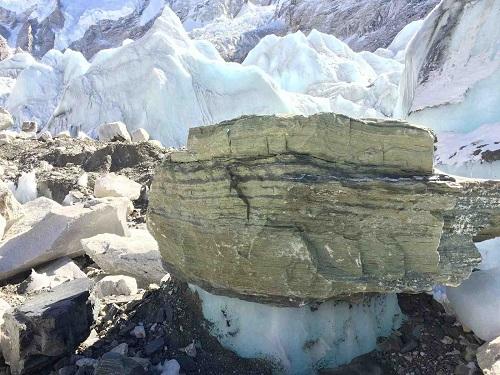 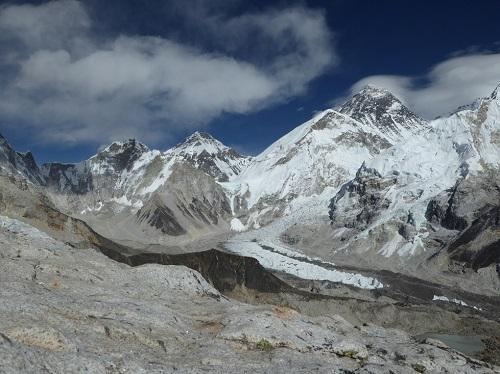